My very proper Mom recently told me that being married was overrated and I should just find someone—anyone—to father her unborn grandchildren. “I’m not getting any younger and neither are you!” may have been her exact words.

As I stated in a past blog, La anti-Latina, I am an anomaly; a single, childless Latina in her 40s.

I don’t believe that Latinos fare much better under the same circumstances.  Many assume that a man is gay or a player if he manages to make it to his 30s or 40s childless.

Whether by choice or by circumstance, we somehow resisted the mythical superpowers that the Latino sperm and the Latina womb hold. We have time to focus on education, careers, travel and all the joys that come from being free of the responsibility of children.  Some of us want children and some of us don’t.  We are all different people with similar circumstances, for women (since I can’t speak for men) this includes learning how to deal with the following situations:

Conversations– In my early twenties I worked in an office full of single and childless women who got along great. One day one of them came in and announced that she was pregnant.  Work turned into a bad episode of the Twilight Zone: The Mommy Zone.  All of a sudden all they could talk about was morning sickness, trimesters and semesters (that one may be wrong), and bottle vs. breast feeding, a new language I didn’t understand.  Work was never the same after that so I coped  by delving into this new thing called work.

Baby showers– I HATE baby showers; there’s no reciprocal event for childless women. No one would be amused upon receiving an invitation stating ‘I just got a cute new 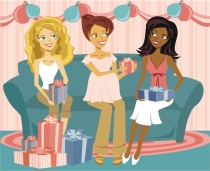 puppy and I’m registered at Pet Smart.’  Aside from the dent gifts put on your wallet, they are three to four hours spent playing silly games (really chocolate as poop?), and saying “No thanks, I don’t like cake.  No it’s true. Yes, I know it’s weird and I’m so lucky that I don’t like it and can save those calories” that I can never get back. To my friends who are planning on getting pregnant, know that there’s a BIGGER and BETTER gift in store for you if my invitation to your shower gets ‘lost in the mail.’  My baby shower will consist of belly dancing lessons, for obvious reasons.

Children’s birthdays– Unless you can keep yourself busy by helping the Mom, you are stuck in conversations with Mom types who make you feel bad about your own childless state by asking questions like “Which ones are yours?” and “Don’t you want to be a Mom?” if they find out the answer is none.  I avoid the latter question by pointing towards a group of kids and saying, “that one” to the first question, while crossing my fingers and hoping that they all don’t know at least one child in the group.

Christmas– My oldest nephew is his his 20s (I was a very young aunt).  I’ve been buying gifts and not finding anything with my name on it under the tree for many years now.  Where is the fairness in that? Oh, and while we’re looking for fairness, where’s that karaoke machine I’ve been hinting about for five years?

To be or not to be….a mom, isn’t always the question

5 steps to letting go of the life you NEVER had

You don’t always get what you want

1 thought on “Do you have Baby(less) mama drama?”