It was October 2009; I had quit my job and was just 10 short days away from a move to Puerto Rico, when my two best friends and I got matching tattoos.

It was something we had discussed just a few weeks earlier—as adult women will do when imbibing one too many cocktails. It would be a symbol of our best-friends-foreverness since our lives would change with my impending move.

Fast forward more than a year when I started a new job and the tattoo that seemed so cool then, became a cause for concern as I contemplated just how I was going to keep it under wraps and away from the eyes of my new coworkers.

Two weeks into the job and tired of wearing not-so-cute hand-me-down sweaters, I decided to come out of the tattoo closet. I started with a 3/4 sleeves and progressed to short sleeves a few days later. To my surprise, no one batted an eye. Now that’s not to say that they didn’t react privately; I’m sure everyone had a mental reaction.

That’s the thing about tattoos: like everything in this world, everyone has their opinion about them and makes snap judgments about people who have them—even those of us who are inked. 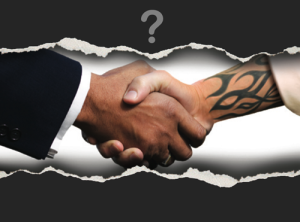 But not all of these judgments are negative. The old stereotypes about people with tattoos are becoming less commonplace as more and more ‘professionals’ venture into tattoo shops deeming it more ‘normal.’

Even my Mom—the lady who once nearly became a martyr for the anti-tattoo crusade, crying, ‘¡Me muero de la verguenza!’ when my sister showed up with the first tattoo in our family—has now opted to save her words and express her disdain with mere looks (it works).

But all of this acceptance and the decline of tattoos’ taboo status doesn’t change the fact that for every cherished tattoo, there’s a tattoo regret.

Inked or not, you know the regrets I’m talking about…

The “I was Young and Oh So Stupid” Tattoo
You now realize that Tweetie Bird doesn’t look so cute in the faded yellow of a decade, and that allowing your aspiring-tattoo-artist friend to talk you into being his first ‘client’ was, in retrospect, not your best idea.

The “I was Drunk in (Insert Name of City You Visited on Vacation Here)” Tattoo
What happens in Vegas, stays in Vegas unless it’s a tattoo that travels home with you as a forever-reminder of what drunk nights in strange cities can lead to.

The “Name of the Ex” Tattoo
His/her name has become synonymous with evil and you wonder why your relationship wasn’t as permanent as that tattoo you swore would bind you together forever.

The “Msspelled” Tattoo
Umm…yeah, dude, your tattoo is “AWSOME”!

The “Let’s All Go Get Matching Tattoos” Tattoo
Oh wait, that may just be my friends and me.

And just in case you’re planning on your first tattoo, I have five and I promise it doesn’t hurt…much!

2 thoughts on “Taboo of tattoos: Memories, regrets, and Moms”